Reports from the 51st District
DEAN DOHRMAN
Rep. Dean Dohrman, a Republican, represents Johnson, Pettis, and Saline counties (District 51). He was elected to his first two-year term in November 2012. In addition to his legislative duties, Rep. Dohrman is an online professor. Rep. Dohrman is a member of Warrensburg and Sedalia Area Chamber of Commerce, and Sedalia Lions Club. He attends Wesley United Methodist Church. A graduate of LaMonte High, Rep. Dohrman earned his PhD from the University of Missouri-Kansas City in 2004. Born in Warrensburg, Rep. Dohrman currently lives in LaMonte.
Recent posts
Archives

This week was another busy one at the Capitol! Among the first bills the House passed this week was a ban on lobbyist gifts. The House also passed HB 1500, known as the hair braiding bill. This bill lowers regulations for certification, making it easier to open a small business, an important employment category in our state. Lowering regulations, as this bill does, will create more jobs in Missouri. Finally, another important piece of legislation passed through the House this week was HB 1246. The passage of this bill is a step forward in addressing the human trafficking in Missouri. HB 1246 requires certain places, such as airports and train stations, to display posters informing victims of resources and services available to them. More on these bills below.

Yesterday, I had a hearing on one of my bills, HB 1528, which requires students at public and private institutions of higher education to pass an examination on the provisions and principals of American civics as a condition of graduation. As many of you know, the study of the U.S. Constitution and Missouri constitution are required to receive an undergraduate degree in Missouri. HB 1528 enhances this instruction by requiring an examination similar to the U.S. citizenship exam given to naturalized citizens. The bill also enhances this instruction by including topics in federalism and judicial interpretation. I will keep you informed of the bill’s progress.

The members of the Missouri House gave bipartisan support Wednesday morning to legislation meant to cut burdensome red tape and reduce government overregulation so that businesses can thrive in Missouri. The House approved HB 1500 to remove unnecessary burdens for those who want to braid hair in Missouri.

Under current law, hair braiders must complete 1,500 hours of training to receive a cosmetology license despite the fact the training does not cover hair braiding. The bill’s sponsor told his colleagues that the current requirements force hair braiders to undergo more training than it takes to become a police officer. He said his bill is meant to remove “unnecessary and irrational burdens” for those who wish to braid hair in Missouri.

The bill approved by the House would specify that hair braiders do not have to obtain a cosmetology license in order to earn a living. The bill would require individuals engaging in braiding to register with the State Board of Cosmetology and Barber Examiners. No education or training would be required to register, except that the hair braider would need to complete a self- test on infection control techniques and diseases of the scalp.

Missouri is currently one of just 13 states that require some form of cosmetology license for hair braiders. The bill sponsor said passage of the bill will help get the government “out of people’s hair.” The bill passed the House by a vote of 131-17. It now moves to the Senate for consideration. The House passed similar legislation in 2017, but the bill expired on the Senate calendar before the session ended.

Also on Wednesday morning, House members worked to once again pass legislation meant to diminish the influence of lobbyists. Similar to legislation the House has passed in each of the last two sessions, the bill would ban gifts from lobbyists to legislators and other statewide elected officials.

Missouri currently has no limits on lobbyist gifts. The bill House members passed this week would create a gift ban on gifts such as meals or tickets to concerts or sporting events. The bill contains some common sense exceptions such as one that would allow for events to which every member of the House and Senate are invited at least three days in advance. The sponsor explained the exception is meant to allow for grassroots-driven events where large groups of Missourians have the opportunity to meet with all members of the legislature. The bill also contains an exception that would allow a legislator to receive an award or accept flowers for the funeral of a loved one without breaking the law.

Supporters of the bill said it is meant to restore the public’s trust in its elected officials by eliminating any appearance of impropriety and banning all gifts that could give a lobbyist undue influence.

The bill passed with bipartisan support with a vote of 134-12. It now moves to the Senate for consideration. Previous versions of the bill did not receive Senate approval before time ran out in past legislative sessions.

Legislation is now on its way to the Senate that is meant to provide rescue information to victims of human trafficking, and educate citizens across the state about the growing criminal industry. The House approved HB 1246 by a bipartisan vote of 139- 5.

The bill approved Wednesday morning would require the Department of Public Safety to develop a poster to promote the use of the National Human Trafficking Resource Center Hotline. The posters would be displayed at common areas where human trafficking can occur such as hotels or motels that have been cited for prostitution, and train and bus stations.

The sponsor of the bill said it will help to save lives and bring victims home to their families. She noted that studies have shown that when victims utilize hotline numbers, they have a better chance of getting rescued. The sponsor also pointed out that the bill will provide law enforcement officers with increased access to tips to allow them to combat trafficking.

If approved by both chambers and signed into law, Missouri would join more than 20 other states that already have similar posters in place.

The discussion and passage of legislation to combat human trafficking took place in the Missouri House as the nation paused to observe National Slavery and Human Trafficking Prevention Month. To raise awareness of this modern form of slavery, the president proclaimed January as a month to educate Americans about human trafficking.

Trafficking is one of the largest and fastest growing criminal enterprises in the world. It involves the use of force, fraud, or coercion to obtain some type of labor or commercial sex act. Each year millions of men, women, and children are bought and sold for commercial sexual exploitation and forced labor. The illegal industry generates billions of dollars in profits by victimizing people in countries in all parts of the world.

Not all indicators listed above are present in every human trafficking situation, and the presence or absence of any of the indicators is not necessarily proof of human trafficking. To get help from the National Human Trafficking Hotline, call 1-888- 373-7888 or text HELP or INFO to BeFree (233733). 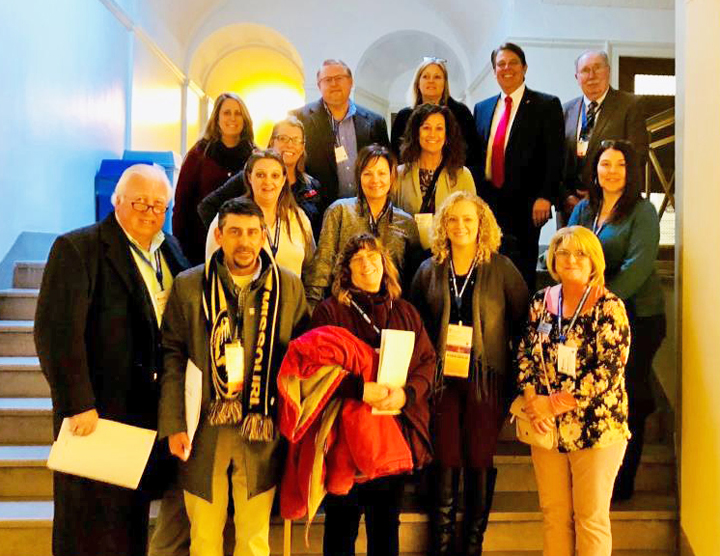 Yesterday, members from Missouri Realtors traveled to the Capitol to voice their support of first-time home buyer’s savings accounts and real estate licensee immunity from liability, both bills that have been filed and are moving on our calendars. It was great to see so many realtors from the 51st District.

It is an honor to serve the 51st District in the Missouri House of Representatives. Each week I will issue a capitol report to keep you informed of activities in Jefferson City. Any concerns or issues you might have are of great interest to me. I look forward to your input and thoughts, so please feel free to contact me at any time if you have questions, concerns, or ideas to improve our state government and the quality of life for all Missourians. My telephone number is 573-751-2204 or you may contact me by email at dean.dohrman@house.mo.gov. Thank you for working with me to make Missouri a great place to live.

More from this blogger · DEAN DOHRMAN
Respond to this blog